Well, league night didn’t go as well as I’d hoped. My partner and I lost our match 2 games to 3. There was one game in which we were leading 4-0 and our opponents raddled off 10 points in a row. That’s when the cards were really cold. However, that’s euchre. You could be the greatest player in the world, but if your feeble foe gets 5 trump dealt to them, you aren’t going to win very often.

Despite last night’s loss, I’m convinced that the strategy we were following was sound. The key to winning euchre (besides being lucky) is knowing when to order it up. For this, I’ve developed a point system.

Point System
I used to play bridge and in that game there is a bidding phase only slightly similar to the one in euchre. In the bridge strategy books, someone created a point system to help figure out if you should bid or pass. Since it works for bridge, it makes sense that it could work for euchre.

Before I explain, here is the point system. If you remember the system and apply it, I guarantee that you will be giving yourself the best chance to win. Of course, you’ll still have to be lucky to win, but we can’t control luck. 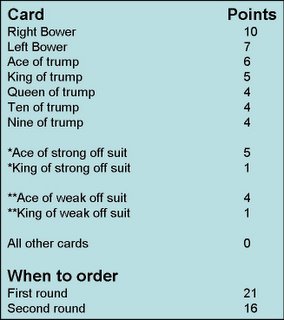 *The weak off suit is the one that is the same color as trump. This one has less cards in it (because the Jack is really a trump) which makes it “weaker”.

When do you order it up? - 21 points! or 16 points!
At first, follow these guidelines when ordering it up.

In the first round of bidding, order it up when you have 21 points or more.

In the second round of bidding (when everyone has passed once), order it up when you have 16 points or more. If you follow these guidelines, you will beat more than half of the euchre teams you play.

In later entries, I’ll explain how you adjust the points in your hand based on where you are sitting relative to the dealer. I’ll also explain what the points mean and how they were derived.

How to practice:
To practice the point system shuffle and deal out 5 cards face up. Determine how many points you have if the trump suit was Clubs. Do the same for Hearts, Spades and Diamonds. If you practice this a couple of times a day for one week, you’ll be able to use it quite easily.

Wow! This is a great page! My strategy was similar but an actually system will really help. Thanks for the comment.

I have a question . . . let's say an Ace of Hearts is up and in my hand I have both red bowers, and lets say the other three Aces . . . am I allowed to pick up the Ace? Is it a legal move? Is the Jack of Hearts considered a true heart? I really need to know ASAP. donnamarquardt2004@yahoo.ca
Many thanks in advance.

n almost any circle of euchre players you WOULD be able to pick it up under those circumstances. The Jack of Hearts is a Heart.

Some people follow a rule that you have to have at least 1 trump in your hand to pick it up. If you had only the Jack of Diamonds, (and no jack of hearts) you may not be allowed to pick up. But in your scenario, you could always pick it up.

So if everyone uses this strategy, how can everyone beat more than half the teams they play?

Brilliant question Peter! Fortunately, not everyone in the known Euchre Universe employs the strategy and even the ones who do will occasionally forget.

I don't know how you got the numbers associated with each card 1 point being a 10% chance to take a single trick but 2 quick calculations do not hold up.

Example 2: You have the 5 lowest trump. 9, 10, queen, king, and ace. The numbers say you have 4+4+4+5+6 or the probability of 2.3 tricks when in fact it is impossible to not get at least 3 tricks. irregardless of where you are sititng and what everyone else has.

The numbers do not take into account the other cards in your hand which will affect the outcome of the expected value of tricks.

You'll have to read later posts. The probabilities given are really statistics of 1000's of hands played following specific rules. Hands like the one you site are cases where the point system requires adjustments.

The point system is a guide, an average, a starting point. Great for beginners. The adjustments improve accuracy but makes it more difficult to learn.

Once a person gets good at the basic system, they can learn about all the strategic adjustments to really improve their game.

I'm confused. Where I play euchre after the first round of bidding the up card is turned over. How then can you order it?

You can't. In the second round you can only order up in a suit that is different than the original upcard.